Ireland is recognised as being the outstanding fishing holiday destination in Europe. The vast variety and quality of fishing in Ireland makes it the perfect destination for your angling holiday.

The Irish climate is well suited to sport angling. It is temperate and kind to the angler with moderate summers, mild winters and adequate rainfall throughout the year. The warm waters of the North Atlantic Drift lap the south and west coasts, giving us a milder climate than our geographical location would indicate.

The result is a fabulous mixture of cold and warm water fish species, capable of exciting the specialist or casual angler on the annual family holiday. In fresh water, they range from Carp, more attuned to warm waters, to the Atlantic Salmon, which is a north Atlantic species.

Many Irish people enjoy fishing but we are happy to share our "riches" with our fellow anglers from all over the world. Few of us, however, fish for coarse fish (freshwater species other than the salmon and trout family) is pike, bream, tench, roach, rudd and eel fisheries. 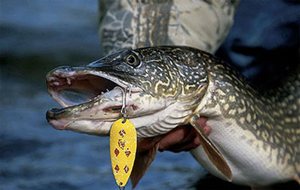 Ireland boasts thousands of lakes (Loughs) and several thousand kilometres of pike bearing rivers and canals which are largely underutilised. The availability and quality of fishing means that Irish pike angling can satisfy the expectations of specialist, experienced and novice anglers alike. Conservation measures have been put in place recently to ensure the quality of pike fishing into the future. 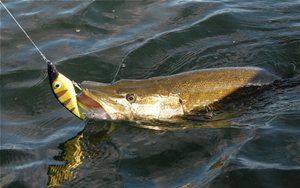 Ireland has quality pike fishing to offer the visiting angler and a supporting tourist infrastructure which will help you to catch that pike of a lifetime. Ireland is now readily accessible by sea and air from both UK and mainland Europe. The availability of low cost air and sea fares enables visiting anglers to tailor their visit and maximise their fishing time. Pike anglers visiting Ireland often target our huge network of pike lakes, many of which are concentrated in the Shannon and Erne River Catchments. There are lakes to suit every type of pike angler from smaller lakes like Castle lake and lakes in the Lough Oughter complex in Cavan, to some huge lakes like Lough Erne.

Many pike anglers like to fish from the bank and there are many well developed lake and river fisheries which have good access. Others love to tackle the lake fisheries from a boat. Pike angling guides and boat hire services are available on all of our major pike waters. We are able provide this service on the nearest pike waters in the area. We can also boast of rivers of a medium size like the Annalee River to really big rivers like the Erne that regularly produce many pike between 15 to 20 lbs. (9.072 Kg.) and several over 30 lbs (13.60 Kg.) annually. 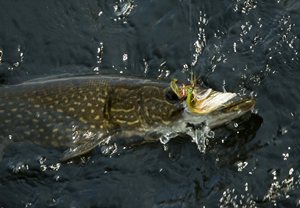 On these rivers there are miles of good bank to fish from in comfort. The pike angler can use a wide range of methods including wobbling and static deadbaiting, spinning, lure and fly fishing. A good range of deadbaits suitable for pike fishing is available from tackleshops from near most of our good pike fisheries.

The pike is one of the most widespread of Irish fish and pike fishing is as old as Irish angling. Pike are predators, but a big pike is perhaps the greatest predator still living in the wild in these islands. Its physical make up, the smooth enameled body, the great head. It has a beauty which no one appreciates more keenly than the pike angler. 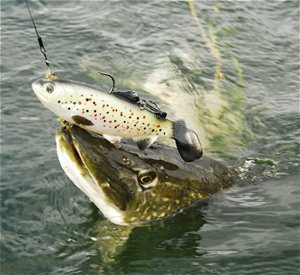 As is much of the sea angling, particularly along the North and west coasts. Day trips on a charter boat to Donegal or Sligo can be easily arranged.

Lakes, rivers and coastal stretches are surveyed and mapped, fisheries are managed and stocked, while banks and access routes to the waters edge are developed to ensure the visitor gets directly and easily to the hotspots.

Most of the angling is organised around recognised angling areas which specialise in catering for the angling tourist. Salmon and trout fisheries are usually the property of an individual, club or organisation and permission and a license is required to fish these.

If youve ever dreamt about a coarse angling trip to Ireland and wondered how you can turn that dream into reality, then the answer is at your fingertips. Picture yourself with your first catch of a bream or winning one of the many angling festivals such as the Belturbet Coarse Angling competition, The King of Clubs or the World Pairs.

Some of the best bream waters in Ireland are the River Erne and lakes including mighty Lough Oughter system and Lough Gowna and in Co Cavan, Upper and Lower Lough Erne, River Shannon, Rivers, Loughs Shannon Erne waterway. Other popular waters include Bun Lake, Killybandrick, Brackley and Bunerky.

Some of the best waters in Ireland for roach are the River Erne and Lakes in Co. Cavan, Upper and Lower Lough Erne, Shannon Erne waterway including lakes. There is an influx of of catches of roach to certain tributaries during May - June period, because of their preference to spawn in flowing waters. For a short period of 1week anglers can have outstanding catches. Another example is the concentrations of fish found in flowing channels connecting individual basins of our larger waters eg Lough Oughter among other spots.

Some of the best tench waters in Ireland are in the canals The stretches of the Shannon Erne Waterway and much of the River Erne catchment particularly lakes like Putiaghan Lake or Bun Lake near Belturbet in Cavan and near Ballinamore in Co. Leitrim which is only a 30 minutes drive. 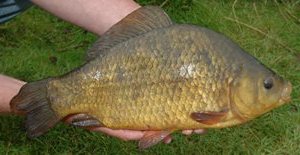 Some of the best Carp fisheries in Ireland are In Galmoylestown and Ballinafid Lakes near Mullingar, Co Westmeath Brothers and Capragh Lakes in Carrickmacross, Co. Monaghan and some small fisheries around some of the coarse angling centres in Co Cavan.

Ireland has some of the most lightly fished rivers and lakes in Europe. The great limestone plain of Ireland covering the whole of the midlands is characterised by big river systems and thousands of lakes. Much of Irelands abundant coarse fish shoals live in these waters. Indeed there are over 8,000 miles of river, lake and canal bank for the coarse angler to explore and enjoy

There is no close season for coarse fishing in Ireland. Fish feeding throughout the year, particularly roach and perch, can be fished all year round. Species such as tench, bream and rudd, which are most active in warmer weather, have a natural season extending from April to October.

In Cavan we have 365 lakes. Some waters have seldom, if ever seen a rod and line but exploration is always an enjoyable part of an fishing holiday, so do not be afraid to "have a go", it might well result in the fish of a lifetime. 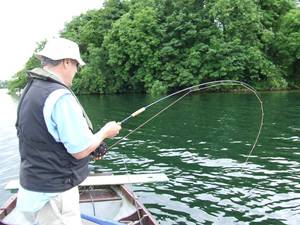 If you have ever dreamt about catching wild brown trout in Ireland and wondered how to turn your dream into reality then the answer is not far away.

With a huge network of rivers and loughs, Ireland is the one of the few last refuges for truly wild trout attracting anglers back year after year in the pursuit of that catch of a lifetime.

The brown trout (Salmo trutta) or Breac Donn (Gaelic) is a native Irish species and the most widely distributed freshwater fish in Ireland. It thrives in waters of all types, from small mountain streams to broad limestone rivers and loughs. Its main requirements are clean water and gravel in which to spawn. 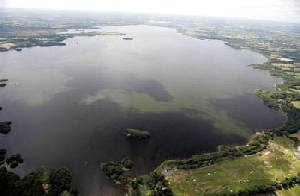 The habitat of the wild brown trout is diminishing all over Europe and at the same time the majority of fly fishing for trout has an artificial character based on catching "rainbows". In this respect Ireland offers the essence of the sport - the pursuit of wild trout taking hatching fly in natural waters.

Irish trout can and do achieve a large size. Every year trout over 10 lbs are caught with the occasional one up to 20 lbs. The trout angler can use a wide range of methods including, bait, spinning and fly fishing. 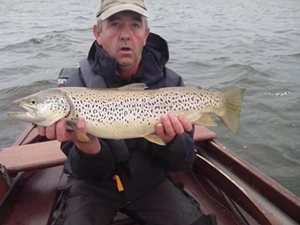 The majority of waters are owned either privately or by the State. Many are leased to angling clubs or associations. A fishing permit issued by the owner or the lessee gives the permit holder the right to fish for set periods ranging from a day to a season. In the Republic of Ireland, permits for the best waters generally cost between 10 and 20 Euro a day. Many of the big western loughs offer free fishing for brown trout. 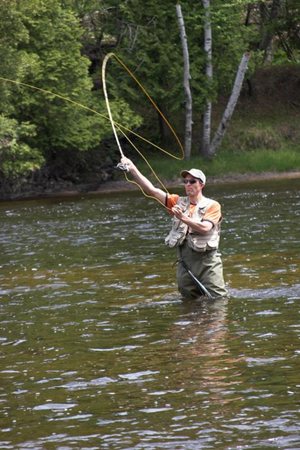 Belturbet is a warm, friendly town with a big welcome waiting for you. Nestled along the banks of the River Erne. The town can be easily explored on foot by following the heritage trail or wandering the nooks and crannies to discover Belturbet for yourself. Belturbet is a historic town which boasts many heritage sites and is steeped in over 400 years of history.

Renowned for its angling, Belturbet is surrounded by the Erne river and numerous lakes and is considered to be one of Irelands best fishing destinations, making it a popular choice for fishermen. Each July and September one of Irelands oldest angling festivals is held on the river Erne. Whether you just want to dangle your legs off the marina or stand waist high fly-fishing in the river, you will be surrounded by breathtaking landscape.

About County Cavan & its waterways

With a unique and vibrant character, Co. Cavan is undoubtedly one of Irelands best-kept secrets. Breathtaking landscapes, rich culture and a thriving hospitality scene combine to make Cavan a feast for the soul; whether rest and relaxation, adrenaline-fuelled activity or simple family fun, its got something for everyone. Affectionately dubbed as Irelands lake country Cavan has also recently emerged as an up-and-coming destination, offering a dynamic blend of traditional Irish culture with 21st century living.

One of Irelands hidden gems, Cavan holds plenty in store for visitors. With stunning scenery, top class restaurants and unbeatable value for money. Can you afford not to take a second look?

Cavan is the source of many rivers in Ireland. Shannon Pot on the slopes of Culicagh is the source of the River Shannon, the longest river in Ireland at 386 km (240 mi). The River Erne is a major river which rises from Beaghy Lough, two miles (3 km) south of Stradone in Cavan and flows for 120 km (75 mi) to Lough Erne. Other rivers in the county include the Blackwater River from Lough Ramor which joins the River Boyne at Navan. the Dee which springs near Bailieborough, the River Annalee which flows from Lough Sillan and joins the Erne, the Cladagh river rises from Culicagh and flows into Fermanagh. The Glyde and the Owenroe also source in Cavan.

Cavan is known as 'The Lakeland County' and is reputed to contain 365 lakes. At 18.8 km2 (7.3 sq mi), Lough Sheelin is the county's largest lake situated in the south of the county and forms a three way border on its waters between counties Meath and Westmeath and Cavan. A large complex of lakes form in the north and west of Cavan into designated Specially Protected Areas (SPA), example of this being Lough Oughter. Other important wildlife protected lakes such as Lough Gowna and Lough Ramor are in the south and east of the county.

Fishing holidays with the Churchview Guesthouse

If youve ever dreamt about a coarse angling trip to Ireland and wondered how you can turn that dream into reality, then the answer is at your fingertips. Picture yourself with your first 100 lbs. (45kg) plus catch of bream or winning one of the many angling festivals such as The King of Clubs. Begin planning your coarse angling trip with a stay at Churchview Guesthouse we can provide you with information about where to go and who to contact to help you get the most out of your trip. With our huge network of rivers, loughs and canals to explore, Ireland is the one of the worlds premier coarse angling destinations. Contact us with any questions about your fishing holiday in Ireland